Hi Def Liposculpting With BodyBanking® for Men in Los Angeles 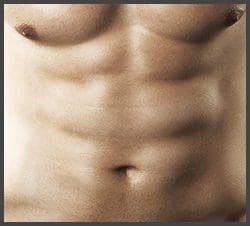 Hi Def Liposculpting With BodyBanking® for men in LA is a less invasive alternative to traditional liposculpture technique designed to safely and effectively eliminate fatty deposits that are often the result of genetics and have proven resistant to traditional weight loss and dieting efforts. Dr. Steinbrech is a plastic and reconstructive surgeon that specializes in liposculpting for men in LA. Liposuction sculpts the body by removing undesirable fat that has not responded to diet and exercise.

The Hi Def Liposculpting With BodyBanking® procedure may last from one to five hours, depending on the amount of fat being removed for male patients in LA. Dr. Steinbrech will use either local or general anesthesia depending on the size of the area(s) being treated as well as several other factors. Methods are discussed during your pre-operative consultation.

During high-definition liposculpture, small incisions are made in the target area and either ultrasonic energy is transmitted through a small probe into the targeted area. This energy breaks cellular membranes surrounding fat cells releasing the lipid contents. A small hollow tube is then inserted under the skin and moved back and forth while suctioning the melted fat out of the body. The Vaser device is capable of selectively delivering ultrasound energy to liquefy the fat in the body without damaging other types of tissues. Once the fat has been melted, it can be suctioned out of the body through very small 2.2 mm to 3.7 mm sized cannulae without causing great trauma to the surrounding tissue structures.

In abdominal high-definition liposculpture, the plastic surgeon uses certain areas as visual landmarks. These areas are then accentuated using superficial liposuction to make deeper grooves in the underlying tissues, thereby highlighting the musculature. By depositing additional fat cells to create more volume where it is needed, the plastic surgeon is able to sculpt the target area to create an athletic appearance to the abdomin. The same technique is used to accentuate muscular definition in other areas of the body.

After the surgeon has finished suctioning and sculpting the target area, incisions are closed up and the patient is moved into a recovery area to be monitored for a brief time before returning home. The entire procedure may take up to 6 hours to complete.

Post-Hi Def Liposculpting, drainage tubes, compression garments and antibiotics may be needed to facilitate the healing process. Many male LA patients return to work within a few days. Strenuous activity should be avoided for about a month.

For more information about Hi Def Liposculpting With BodyBanking® for men in Los Angeles, please visit Dr. Steinbrech’s clinic to set up your no-obligation consultation today.